June card of the month is the Moon. The Moon is also associated with the emerging and descending consciousness; both in and out of sleep; and madness as well as awakening into intuitive and prophetic powers. The Subconscious. This card traditionally represents the most shadowy part of the path. We are walking through the underworld in these times. There are hidden traumas coming to the consciousness and old wounds that need to be cleaned and healed. This is the path of the mysterious Moon. One must keep moving forward to see the Dawn.

The Wounded of this card: Mood swings, depression, mental illnesses, this is the Dark Night of the Soul. The rock bottom of the psyche in search of truth, answers, even of meaning. One is lost; either adrift or drowned in the overwhelming pain of trauma and truths long hidden.

The Darkness of this card: The Moon illuminates the deep shadows of the night and shines in the cool darkness. Relief from the heat and the glare of the day. Hard edges and boundaries dissolve, membranes become more permeable, possibilities open. The nocturnal dreamscape and the unconscious mind which articulates from the abyss of imagination. Transformation, dreams, and deep desires. Visions disguised as nightmares show what needs to be addressed, they show the answers and solutions the conscious mind has blocked in fear.

May card of the month is the Eight of Pentacles. This is the card of one who is in the journeyman position no longer the apprentice but far from a master. This indicates a time of honing and refining skills and intellect. Use this time wisely, efforts will be rewarded in equal weight.

The Wounded of this card: Impatient for acclaim without dedication to the skill. Seeking status but having nothing to establish it. May even take credit for the efforts of others. Falsifying results, inflating the value, counterfeit artistry.

The Darkness of this card: The discipline and diligence can be all consuming, supplanting relationships as well as set personal and social conventions. This dedication inside comes from the deepest desires, born from visions in the shadows of ideals and material needs long unexpressed. This focus can be completely absorbing, changes will be methodical and unrelenting. If crossed this can lead to the individual turning away from those opposing and eliminating them from everything.

April card of the month is Judgement. Failure to see past the closed coffin of the mind. Delay and refusal to accept the reality of the current situation and the life impacting consequences of the moment. Choices need to be carefully planned and executed. Rash actions will bring about severe results. All things must have a great reckoning before moving forward can happen. Are you digging deep enough?

The Wounded of this card: Mired in a judgemental mindset. Assigning “value points” to every slight and betrayal; real or invented. The seeker is standing in a grave, refusal to move is stagnation and death.

The Darkness of this card: The clarion call of Judgement can be as destructive and devastating as the thunderbolt in the Tower. Where the Tower is a strike of enlightenment, Judgement is a summons, a calling, a call to arms- to action- to involvement.

March card of the month is the Eight of Chalices. A turning point of the heart and in the spiritual undercurrent. There is a restlessness to this card, a need to find something more fulfilling, something less draining, something less repetitive, or just something else. The act of letting go or turning away frees one for new experiences, love, and life.

The Wounded of this card: Refusal to accept the ending of a situation or idea. Unwilling to move from a stagnant or unhealthy situation because of familiarity, timidity, or self-doubt.

The Darkness of this card: A deep pull away from comfort and stability. A yearning for the intangible. A clear sense who one is, and is not, at least not yet. The pull is visceral and powerful, with an undertow that can pull the very ground out from beneath.

February card of the month is the Five of Chalices. Disruption and re-alignment with the harmony of the Cosmos. Our personal patterns may serve in the short term but anything that is unhealthy will begin to show the dissonance and discordance soon enough. Our personal harmonies need re-tuning, and our relationship symphonies need to be addressed.

The Wounded of this card: Identity conflicts with family, society, culture, sexual orientation or alignment. Instability caused in the circle of family or friends. Deep loss and regret that alters the individual’s views. Deep spiritual loss, the metaphoric fall from grace. Feelings of emotional or spiritual exile.

The Darkness of this card: The Fives are the cosmos visibly intersecting with the Querant, here in the form of emotional and spiritual deluge. The overwhelming and submerging of this card breaks the complacency of the Fours. Here the tsunami is necessary to get things moving again. The isolating and revealing side of chaos. The deeper currents, long repressed, that compels revelation. The unmasking that clears the way for new relationships and a new, clearer life.

January card of the month is the Five of Swords. The disruptive nature of the Five crosses with the extreme activity of the Swords. The breaking down force of nature to clear the path for renewal is strongest here. The Music of the Spheres is shifting into grand harmonics that vibrate and disrupt lesser energies, shattering trends of disharmony and re-establishing the Cosmic Symphony. Wild swings of energy to extreme points and violent shifts in fortune are not unexpected under this card.

The Wounded of this card: Pessimism distorting and exaggerating the loss and result and colouring the ability to move on. Refusal to see the options remaining. Despair.

The Darkness of this card: The Fives are the cosmos visibly intersecting with ones path, here in the form of harsh impact and cuts. The loss and exposed treachery of this card breaks the repose of the Fours. Here adversity is necessary to get things moving again. The cutting and trimming side of chaos. The cold reality creates a heartache that compels change. The truth of separation, revelations, and loss that clears the way for new directions and partnerships.

December card of the month is the Knave of Chalices. A warning card this time. One who claims other’s visions as their own. The false friendship, one sided and advantageous. Learning to play on the sentiment of others without a true connection. Be wary of these people especially during the holiday season. They will prey on the goodwill of others but give nothing to anyone. An English 1750 deck calls this card “The Sly Knave”.

The Wounded of this card: Repressed or suppressed experiences. A vision, sight, or belief, that is ridiculed and/or attacked. To accept the jaded views or opinions of others out of ignorance and naïveté. The toxicity of trying to force yourself to adhere to beliefs or way of life that is opposed and/or harmful to your nature.

The Darkness of this card: The Page of Cups is expressing untapped desire, unspoiled and unbiased. Optimistic and at time unrealistic, but also open and vulnerable. Visionary with flashes of insight, emotional, artistic, amorous. The stirring of the subconscious.

November card of the month is The Eight of Pentacles. Eight here is leaning towards material progress and a clear sense of where and who one is now which is needed for further forward motion. Meticulous attention to detail. The means toward a desired end. A work of intricate beauty. Honing skills in a trade or craft. A developing artisan.

The Wounded of this card: Impatient for acclaim without dedication to the skill. Seeking status but having nothing to establish it. May even take credit for the efforts of others. Falsifying results, inflating the value, counterfeit artistry.

The Darkness of this card: The discipline and diligence can be all consuming, supplanting relationships as well as set personal and social conventions. This dedication inside comes from the deepest desires, born from visions in the shadows of ideals and material needs long unexpressed. This focus can be completely absorbing, changes will be methodical and unrelenting. If crossed this can lead to the individual turning away from those opposing and eliminating them from everything, or if blocked this can lead to an impassable stalemate.

October card of the month is The Five of Wands. The number of disruption and change in the very active Wands suit. Active contesting. It could be battle or competition, struggle or training, but active participation is present.

The Wounded of this card: The fire of the Wands blazes out of control once again. Fair play and boundaries have been violated. Playfulness masks a true intention to cause harm.

The Darkness of this card: The wanton and freeing side of chaos. The fiery energy creates a restlessness that compels movement. The breaking down energy that clears the way for new ventures. The image here is of a fiery dragon emerging, one of passion, fire, and destruction.

I will be posting a card of the month with accompanying interpretations.

September card of the month is the King of Chalices. Outwardly calm but deeply emotional. Consort to the Queen and deeply invested in their mutual reign. Open to the power of the heart and rule side by side.

The Wounded of this card: A liar, a manipulative seducer. One who extorts rather than partners.

The Darkness of this card: Churning with dark currents that move beneath, the King of Cups is the voice of the subconscious personified, seductive, insistent, unrelenting. He moves in the depths with ease and confidence. 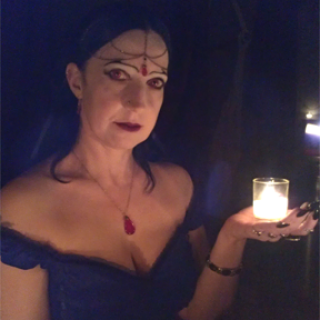